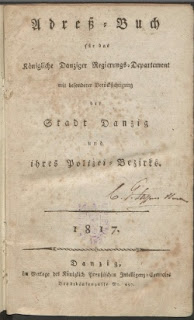 Today I have analyzed a very special publication from 1817. It is Adreß-Buch für das Königlische Danziger Regirungs-Depatement ('Gdańsk Addressbook 1817'). It is the source from which Gedanopedia took its information about Mr Christian Tolkien and his Buchhandlung-Antiquariat ('Second-hand Bookshop') at Klein Scharmachergaße 3 (today this street unfortunately does not exist; its name comes from the guild of wheelwrights) in Gdańsk. I have discovered that Herr Tolkien was also an official in the City Council who was responsible for street lighting in whole Lower Town. In the part of the Addressbook entitled "Deputationen von Raths und Staatsbürgerschaft für spezielle Management-Geschäftsbereiche" ('Deputations of the Council and Citizenship For Special Management of Business Areas'). There Christian Tolkien is called Offiiciant bei der Straßen Erleuchtungs-Anstalt auf der Niederstadt or an 'Official for the Street Lighting in Lower Town'.

In 1817 there is only one Tolkien in Danzig. The other Tolkiens from this line live in London. Daniel Gottlieb Tolkien had died in 1813 but John Benjamin Tolkien, great-great-grandfather of J.R.R. Tolkien still lived in Clarkenwell, London with his family. We don't know who was Christian Tolkien for them. But we can assume that Herr Christian Tolkien was their father (from English documents we know that Daniel's and John's parents were Christian and Eufrisina Tolkien from Danzig) or their brother. 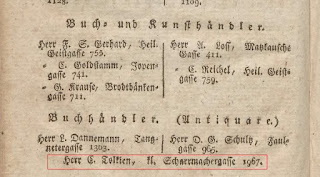 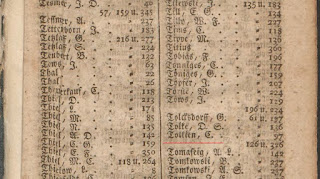 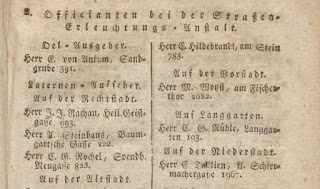