According to Das Kriegswesen der Stadt Danzig (Part 1) by Werner Hahlweg (1937) Danzig/Gdańsk was divided into four parts: Koggen-, Hohen-, Breiten- and Fischerquartier. Each one had its own regiment: Red, White, Blue and Orange. In Blue Regiment responsible for defence of Breiten Quartier there was a leutnant Michael Tolkien. He is the oldest Tolkien in Gdańsk (Danzig) I was able to find in the sources so far!

At the moment we know five Tolkiens from Gdańsk/Danzig:

Can (1) be father of (2)? Yes, it is quite plausible! In my opinion it is also possible that (2) and (5) are the same person (I can imagine a 90-years old antiquarian), though (5) can be of course another son of (2), his relative or someone else. According to the family tradition the Tolkiens left "Saxony" and arrived in England in 1756. If so, Daniel would be around 9 and his brother Johann 3. If their father – Christian Tolkien – arrived in England with them or not we don't know. They could come to England with their mother Eufrisina or with another relative. Anyway they were connected with the German Lutheran Community in Savoy Chapel, London. And there are hidden answers to our questions.

And another thing – I must check if (1) Michael Tolkien from 1697 was of Danzig, East Prussian or maybe... Saxon origin. Saxon? Yes! – in 1697 Augustus II. The Strong, Elector of Saxony, became King of Poland. 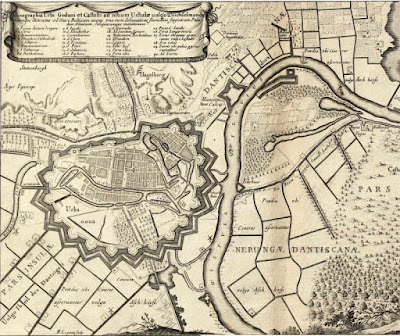