My four big discoveries in the #TolkienAncestry in the year 2019 are:
Today I want to write more about this last discovery. After my appeal and request from the post entitled "Important news about Professor Tolkien's ancestors!" my American friend, Mrs Charlaine Tolkien, thanks to whom I could publish the letter by Professor Tolkien from 1951, wrote to me:

"I had my brother's DNA done in 2010 and I have scanned the front page for you."

Charlaine's brother is Mr Charles Embury Tolkien. The genetic test of Mr Tolkien was made by "Ancestry.com | DNA". His results were interpreted by the best Polish specialist in the genetic genealogy, Mr Łukasz Łapiński. His verdict is: "haplogroup R1a-Z92, rather certain West Baltic subgroup YP270, quite possibly YP350 or another related branch". Mr Łapiński wrote:

"I'm happy that I could help a little bit with DNA classification of Tolkien's Y-DNA Line. Prussian ancestry of that great author is great news. I've got also Prussian roots (from paternal grandmother side), So that information is also awesome for me. Looking forward for next steps in discovering Tolkien ancestry!".

This specialist in the genetic genealogy suggests that a member of the Tolkien family should do more sophisticated SNP test. That would be really great!

What is the genealogical relationship between Mr Charles Embury Tolkien and Professor J. R. R. Tolkien? Charlaine Tolkien made this simple form of the family tree according to my instructions: 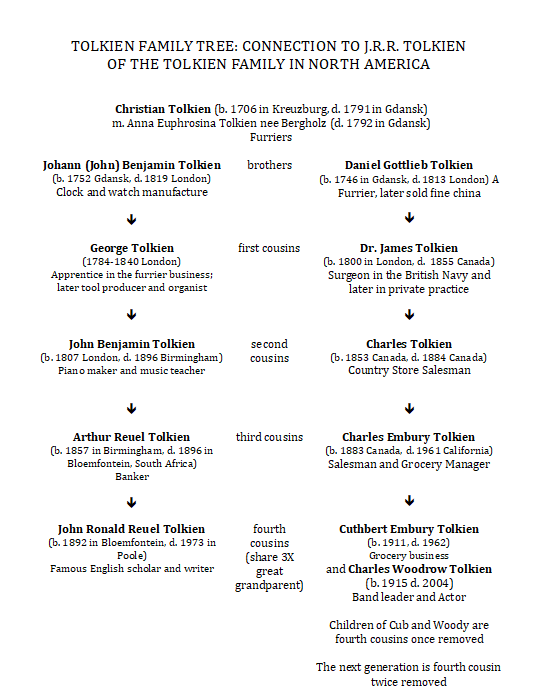 Common Tolkien ancestor of these two branches of the Tolkien family was the Feuerwercker from Danzig (Gdańsk), Christian Tolkien (born in Kreuzburg, Kingdom of Prussia in 1706, died in Danzig/Gdańsk in Poland in 1791). If Mr Chales Embury Tolkien, Christian's great-great-great-great-grandson belongs to the Prussian (West Baltic) haplogroup R1a-Z92, so his Tolkien ancestors belong to the same haplogroup too. And even more - J. R. R. Tolkien and his descendants should belong to the same haplogroup. It is in accordance with my genealogical research which proved that the Tolkiens' ancestors were Prussians (who spoke a Baltic language known as Old Prussian) from the tribe of Natangians, who lived in a village called Tollkeim (before the Second World War in East Prussia). The Tolkien family-name comes from the Tollkeim place-name as many surnames in the German-speaking parts of Europe (Tolkeim > Tolkein > Tolkin [spelled Tolkien, Tolkiehn, Tollkühn etc.]).

And there is something thrilling in this Z92! Really! Today Z92 characterizes descendants of the Old Prussian, Yotvingian and Lithuanian populations. But Z92 as the ancient DNA (aDNA; it means DNA isolated from ancient specimens) should be interesting to every fan of J. R. R. Tolkien's literature because it belongs to the... Vikings of the Baltic Sea! It was found in the Viking burials from today's Estonia, Poland and Russia:

It is very possible that some branches of Z92 became Old Prussian and Yotvingian because some Vikings from eastern shores of Baltic Sea became witings, a class of the nobiles in the Old Prussian society.

To be precise a witing (from Old Prussian wītingis) was an Old Prussian nobil, a nobleman, a mounted warrior. It is an Old Prussian term related to the Polish wiciądz (Czech vitěz, Russian витязь, etc.), meaning "a warrior", "a winner" and "a hero". In a document of the Komtur of Koenigsberg from August 10, 1299, regarding Sambia, we find almost a hundred of old witings (Latin antiqui witingi) who remained faithful to the Teutonic Order during the Second Prussian Uprising. In the Teutonic State, they became the so-called free Prussians, they received land and were called up for military services (used, for instance, in the intelligence units and for information service like the tolks, the interpreters of the Teutonic Order). Yes, the tolks!

I suppose that a medieval ancestor of J. R. R. Tolkien was a witing used by the Order as an interpreter, a tolk. His ancestors could be Vikings of the Baltic Sea. He founded a village called Tolkeim, in Old Prussian "a village of a tolk". His descendants were called the Tolkeims which became the Tolkiens in the 17th century.
_______________________

The theme of The Lost Road is one of 'Preincarnation': there are a series of occurrences throughout time of father and son duos sharing names that are etymologically connected with Amandil ('Bliss-friend') and Elendil ('Elf-friend'). These include Eädwine-Ælfwine of Anglo-Saxon legend, Audoin-Alboin of Lombardic, through to "the traditions of the North Sea concerning the coming of corn and culture heroes, ancestors of kingly lines, in boats".[1] In the story the present pair—Edwin and Elwin—travel back through the different phases of the history of their names, eventually reaching the time of Amandil and Elendil and the Akallabêth or Atalantie ('Downfall' in Númenórean and Quenya respectively) of Númenor.

Would you like to see the Lost Road of the patrilinear ancestors of J. R. R. Tolkien? Knowing his probable haplogroup we can track the road of his ancestors from Palelitic Africa and Asia to the Iron Age and Medieval area of Baltic Sea (according to the tool SNP Tracker): 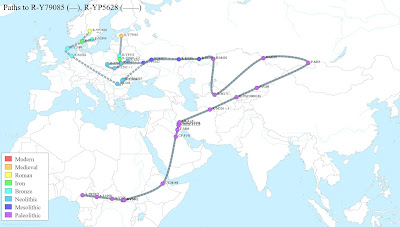 See also this general "family tree" of the haplogroup R1a made by Łukasz Łapiński: 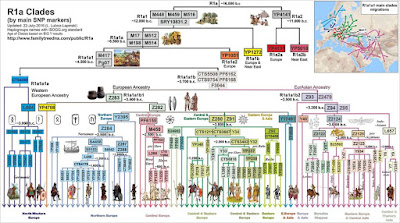 And in the end I can say that by accident the Tolkien family are my distant cousins. Years ago I made my own genetic tests. And to my surprice I found out that my family, the Derdzinski, are also descendants of the Balts, the Old Prussians or Yotvingians. My haplogroup is R1a-Z92 (YP350*)
Autor: galadhorn o 11:36