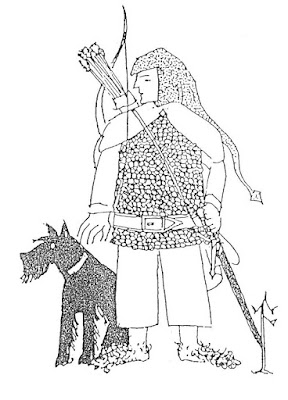 Galadhorn was born in 495 FA in Mithrim as the only son of Galachal and Meleth. His parents were fugitives of Dor-lomin and they found help and rest among the Grey Elves of Mithrim. There Galadhorn met the Elves for the first time and befriended many of them. Other Men called the boy 'Elvellon' that means Elendil in High Elvish.

Galadhorn's mother-tongue was Mannish that later became the usual language of Númenor, but he loved Mithrim Elvish dialect so much that he began to compose short poems and songs in this language. Later - as will be told - he found out the beauty of Quenya. When Galadhorn was fifteen Gondolin fell and some of the Gondolinrim people escaped to the Mouths of Sirion. There they founded the last Elvish kingdom of Beleriand. Galadhorn's parents were killed in the meantime by the Easterlings and our boy escaped southwards with the other people of the Hador's folk. He found his new homeland in the Sirion's Havens and there he met Pengolodh and the other Lambengolmor of Gondolin. Finally Galadhorn could share his linguistic passion with the others. Pengolodh the Wise was his master and from him the young man learned a lot about Quenya and Sindarin and about the writing systems. Pengolodh was content too, because he could listen the true Northern Mannish dialect in the Galadhorn's mouth. Galadhorn's main interest was Sindarin with all its dialects. He composed a big Sindarin dictionary where he recorded the Grey-tongue of Beleriand. He wrote many poems and histories in Sindarin too.

[His writings were taken to Númenor and later to Gondor (Minas Tirith) and Imladris - Bilbo Baggins found the manuscripts in Elrond's library and in this way they were transported to the Shire. Now I, Frodo G. Maggot, have a copy of one of the Galadhorn's MS] Galadhorn fought with the Feanor's sons where they attacked the Havens and defended Pengolodh - his master. He was wounded in the battle but fortunately survived and could write a lament about the terrible Kinslaying. In 551 Galadhorn being a man in his 56 was killed in the War of Wrath, at the Angband Gates. His sons - Galachal and Galdor - and his son's families emigrated to Númenor in the Second Age.
Autor: galadhorn o 05:50