From The Lord of the Rings Fanatics Forum on Tolkien and the name of the Goddess Sulis Minerva from Bath (Lat. Aquae Sulis): 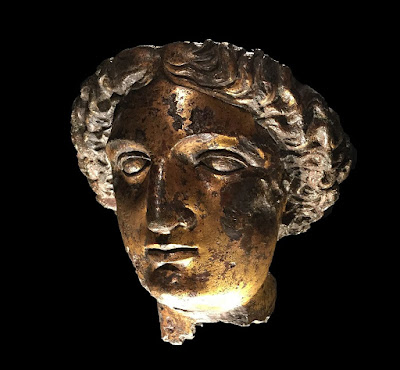 "Tolkien's assistance to Sir Mortimer Wheeler [ie. his note on the name Nodens in Wheelers' report on the Lydney excavations] is well known; but I've just come across another example in my copy of the first volume of the Oxford History of England; Roman Britain and the English Settlements by Collingwood and Myers, first published in 1936. [around the time that TH was at the publishers'.]

Collingwood was a colleague of Tolkien's at Pembroke College Oxford, and in his acknowledgements, Tolkien heads the list, for his 'untiring help with Celtic philology'.

And on the subject of Local Celtic Deities we have:

'Sulis (1) the goddess of the hot springs at Bath, came into her own at a very early date... But less than thirty miles away across the Severn, Nodens, the hunter-god of the Forest of Dean, who survived in later mythology as Nuada of the Silver Hand, king of the Tuatha de Danann, and later still as King Lear, had to wait for his splendid temple...'

(1) She is traditionally called Sul, but Professor Tolkien points out to me that the Celtic nominative can only be Sulis, and our authority for believing that even the Romans made a nominative Sul on the analogy of their own word sol - perhaps meaning the same - is not good. The Celtic sulis may mean 'the eye' and this again may mean the sun'.

Here we have Collinwood using information directly from Tolkien's note on the name Nodens, but without acknowledgement, I might say"
Autor: galadhorn o 05:39