I can see that an error is still present in the descriptions of George Tolkien (1784–1840). His name was George Tolkien and not George William Tolkien (like for instance in latest Scull & Hammond's Companion and Guide or at Tolkien Gateway)!

This is the act of George's baptism in the Savoy Lutheran Chapel from 7 November 1784. See the name George. And by the way you can see below the baptism of Daniel George, Daniel Gottlieb's son. I remind that the fathers, John Benjamin Tolkien and Daniel Gottlieb Tolkien were both brothers born in German-speaking Gdańsk in Poland: 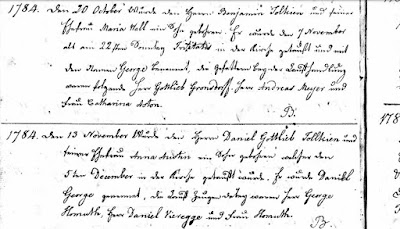 And here George's wedding in 1805. See the name George, and not George William. George William Tolkien was George and Eliza Lydia's son! And by the way it would be nice to check if Richard Baynes from the next record was a relative of Pauline Baynes: 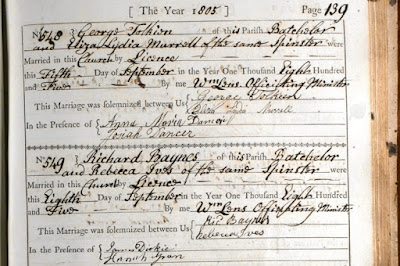 When George Tolkien, the Professor's great-grandfather with the roots in Polish Gdańsk died, he was buried on the cemetery of St George the Martyr, Queen Square, Camden (see his London address: 25 Bidborough Street, St Pancrace). And his name was still George and not George William. The books on the history of the Tolkien family should be corrected, please.
Autor: galadhorn o 13:16