*ond 'stone' in Ivernian and other ancient words

From one of The Letters of J.R.R. Tolkien (p. 419) in which the Professor discusses the origin of the name Gondor:

(...) When about 8 years old I read in a small book (professedly for the young) that nothing of the language of primitive peoples (before the Celts or Germanic invaders) is now known, except perhaps ond = 'stone' (+ one other now forgotten) (...)

Thanks to Carl F. Hostetter and Patrick Wynne and their text  "Stone Towers" (first presented at Mythcon XXIV in 1993 and then published in Vinyar Tengwar #30) we know now that the "small book for the young" was in fact quite a big book for the older entitled Celtic Britain by John Rhys (1904). Mr Rhys was a professor of Celtic in the Oxford University. You can read it here. 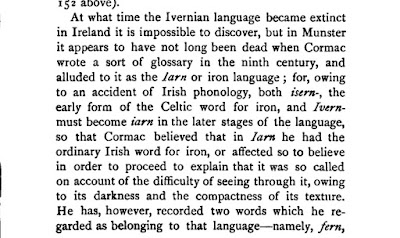 And I want to present you the scans of the part of the book about ond and fern...
Autor: galadhorn o 14:10