Discovery! Tolkiens migrated from Gdańsk to London through... Amsterdam! 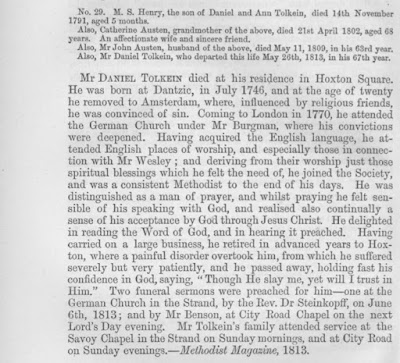 Let me tell you about my new discovery! Last Saturday (9 September 2017) I visited Wesley Chapel in London (by City Road) and the Bunhill Fields Burial Grounds in front of the Chapel. Nice people from the Methodist community provided me with new material about Daniel Gottlieb Tolkien. Let us see how many new information we can find in the book by George Stevenson!
It is written there that Daniel Gottlieb Tolkien was born on July 1746 in Gdańsk ("Dantzic" which means Danzig). In 1766 he moved to Amsterdam, where he had some "religious friends", and where he was "convinced of sin". It means probably that in Amsterdam his way to the deeper frienship with God began. According to Evangelical Christianity justified are the people who are convinced of their own sin. Daniel (and his younger brother John Benjamin?) came to London in 1770 where he attended the German Church under Mr Burgman. There his convictions were deepened. Having acquired the English language Daniel Tolkien attended English places of worship, and especially those in connection with John Wesley. Soon he joined the [Methodist] Society, and was a consistent Methodist to the end of his days. "He was distinguished as a man of prayer, and whilst praying he felt sensible of his speaking with God, and realised also continually a sense of his acceptance by God through Jesus Christ. He delighted in reading the Word of God, and in hearing it preached. Having carried on a large business, he retired in advanced years to Hoxton, where a painful disorder overtook him, from which he suffered severely but very patiently, and he passed away, holding fast his confidence in God, saying,

"Though He slay me, yet will I trust in Him."