Revelation and revolution! I have left the Mormon centre of the family research in Wrocław where I have found many scans of the parish books from Gdańsk with great happiness today. After many months I have finally found my "London Brothers" in Gdańsk in the Kingdom of Poland of the 18th century!

In a craftsmen's suburb of Gdańsk, in Petershagen (today Zaroślak) there lived with their "respectable and religious parents", Christian Tolkien and Anna Euphrosina Tolkien, nee Bergholt (or Bergholtz). Christian (a shoemaker from Kreuzburg in East Prussia) and Anna Euphrosina got married on 26th of October 1745 in  the Lutheran Salvatorkirche (Saviour Church) and on the 18th of July 1746 they baptized their first son, Daniel Gottlieb Tolkien. A few years later their second son, Johann Benjamin Tolkien was baptized in the same church on the 11th of June 1752. One of the godparents of J.R.R. Tolkien's great-great-grandfather was Euphrosina Tolkien, wife of the master furrier from Gdańsk, Michael Tolkien, who was Christian Tolkien's brother.

Let us see the original, hot, fresh documents, straight from the parish books digitalized by the FamilySearch:


It is really a miracle that these documents have survived and that I could find them. Now we can be sure that the Professor's ancestors came to England from Gdańsk and earlier from Kreuzburg in Prussia. The homeland of the Tolkien family is not only Birmingham and London. It is also Gdańsk in Poland and Kreuzburg in East Prussia, today Slavskoye in Kaliningrad Oblast! My research has been crowned today with this splendid discovery! Finis coronat opus.

By the way, I love this part of the parish book from Savatorkirche with the list of rulers of the land and town of the Tolkien family from Gdańsk: 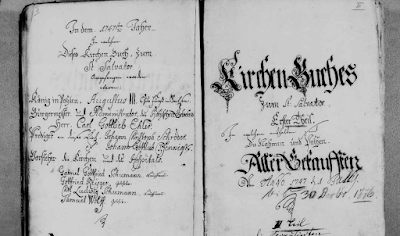