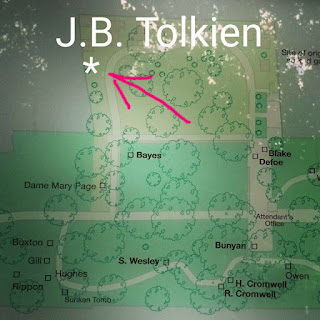 More about John Benjamin Tolkien can be found here.

During my last visit to London I was also to the Non-Conformist cemetery of Bunhill Fields (with graves of Defoe, Blake and Bunyan) in front of the Wesley Chapel (where Daniel Tolkien was buried). I found John Benjamin Tolkien's grave where also his wife Mary is buried.

Tolkien (who was born as Johann Benjamin Tolkien in Gdańsk in 1752) is buried in the part of the cemetery which needs renovation in my humble opinion. I worry that this important tomb stone is now in danger being isolated. I hope the London members of our Tolkien Society will help this tomb to survive next few hundreds years!

I still do not know to which Non-Conformist community John and Mary Tolkien belonged. They are buried in the part of the cemetery where we can find members of the Bible Society. The Tolkiens are buried in the same grave as William Shrubsole (see here) who was dismissed from his service in the Anglican Church "for frequenting 'conventicles'". Did the Tolkiens frequented conventicles too? Or were they Lutherans (like their relatives in Gdańsk and East Prussia)? Were they simply Methodists like Daniel and his family? Or maybe they belonged to the evangelical Religious Tracks Society? Or they were connected with the Moravian Brothers? Or maybe they were Baptists? All we know is that they baptized their children in the Savoy Lutheran Church and that they were connected with the Anglican parished in London.

I present my photos from Bunhill Fields Burial Grounds taken in September 2017: 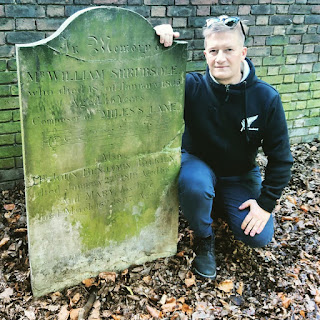 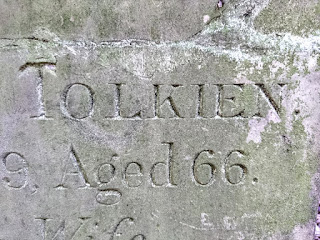 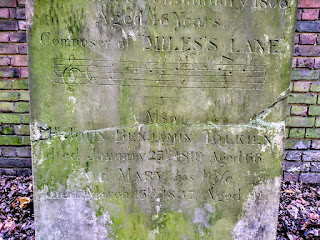