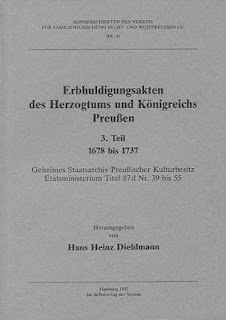 Mr Michael Tolkien's funeral record (Gdańsk/Danzig, 29 November 1795, see here) indicates that the Tolkiens from Gdańsk had close contacts with "Preußen" or with East Prussia. Mrs Elisabeth Tolkien, née Klinckerd (another form of this Dutch family name is Klinkert) died in that region (before the partition of Poland in the years 1772–1795 Gdańsk and East Prussia were different countries, but after 1793 Gdańsk/Danzig became part of the so called Westpreußen, West Prussia) but she was buried with her husband in St Cathrine church, Gdańsk/Danzig.

The big family of Tolk/Tolkien (spelled Tolck, Tolckin, Tolckien, Tollkien, Tolkien, Tolkin etc.) lived in many places around Königsberg from at least 16th c. (read about Tewes Tolkin from 1540) near Labiau, Eest Prussia). If I want to find the direct ancestors of Mr Michael Tolkien, the citizen and master-furrier from 18th century Gdańsk/Danzig I should find rich and influential Tolkiens from the Königsberg area. And I have some candidates...

In Hans H. Diehlmann's, Erbhuldigungsakten des Herzogtums und Königreichs Preußen, 3. Teil: 1678 bis 1737, Hamburg 1992, s. 112, 247, 350 we can read about the sovereigns, the Electors of Brandenburg, and (after 1701) the Kings of Prussia, and their so called Erb-Eid or the oath of inheritance taken by the king. In 1690–1717 it was given by three Tolkiens from East Prussia:
Gottfried, Christian and Michael. Names with the meaning for us who know the Tolkiens from Gdańsk/Danzig. This is something I need to check very carefully, because it is quite possible that Michel Tolkihn is the same person as Michael Tolkien, leutnant in Gdańsk/Danzig in 1697 (see here) and Christian Tollkien may be Daniel Gottlieb Tolkien's father (and Johann Benjamin's too?).

Let me check it!