The Tolkien Family Tree on Ancestry.co.uk
Why I think John B. Tolkien was born in Gdańsk

I dedicate this note to J.R.R. Tolkien's biographers: John Garth, Christina Scull and Wayne Hammond. I hope it can be of interest to you ☺

The first time I have found the information about the Gdańsk/Danzig ancestry of the Tolkien family's branch to which belonged J.R.R. Tolkien was when I joined the paid services of the Ancestry.co.uk There I found the Tolkien Family Tree made by Linda Winifred Tolkien from Brisbane, Australia. Mrs Tolkien knows that the Tolkiens came from Gdańsk/Danzig, she treats Daniel Gottlieb Tolkien and John Benjamin Tolkien as brothers. But she doesn't know that their parents were Christian and Euphrosina Tolkien from Gdańsk. I have tried to contact Mrs Tolkien...

I would like to show you the fragments of that Tolkien Family Tree which shows the Gdańsk/Danzig roots of J.R.R. Tolkien's great-great-grandfather, Johann (John) Benjamin Tolkien:

I would like to show you the proofs that Daniel Gottlieb Tolkien and John Benjamin Tolkien were brothers (there are still the skeptics who demand the proofs).

John Benjamin Tolkien (father of George Tolkien, grandfather of John Benjamin, great-granfather of Arthur Reuel and great-great-grandfather of John Ronald Reuel Tolkien) was probably born in Gdańsk (German Danzig) in 1753 and he was a younger brother of Daniel Gottlieb Tolkien from Gdańsk (we have his 1794 Act of Naturalization where his birthplace is "Dantzig").

Both brothers were probably also brothers of Christian Tolkien, a Gdańsk antiquarian and Prussian official, who died in 1821 (he changed the family name to Tollkühn after 1812) and is buried in Gdańsk St Mary Cathedral (read about the proofs that Christian Tolkien's parents were Christian and Euphrosina Tolkien).

We have more and more proofs that J.R.R. Tolkien's great great grandfather was born in Gdańsk, Poland (in 1753 Gdańsk was the most important Baltic town in Poland during the Poland-Saxony union). Let me ennumerate them: 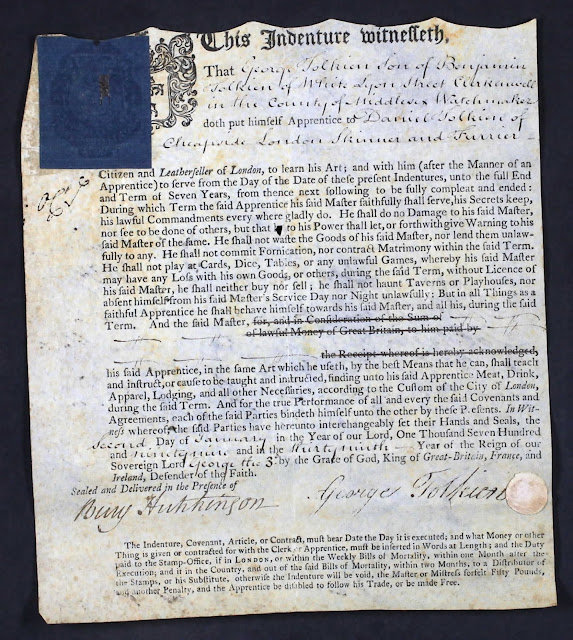 3) John Benjamin Tolkien was Lutheran and he spelled his first name Johann (see no. 1)


4) Ann Austin, wife of Daniel Gottfried Tolkien was a witness during John Benjamin Tolkien's wedding with Mary Wall (in 1781):

5) John Benjamin Tolkien is buried close to Daniel Gottfried Tolkien; both on the Methodist graveyards in London by the City Road (see here).


Of course I am still looking for the acts of births of Daniel Gottfried Tolkien and John Benjamin Tolkien in Gdańsk (at the moment I suppose their baptisms took place in St Cathrine church in Gdańsk/Danzig)...