Another proof of the East Prussian origin
of the Tolkien family!

In 2001 Almacundo from TheOneRing Board wrote:

Yesterday I sent a number of e-mails to German Tollkuehns/Tolkiehns, etc. I got this reply from Günther-Ulrich Tolkiehn, professor of "Informations- und Kommunikationentechnik":

"Several years ago, I wanted to find out, whether we are rellated with the author. My findings (mostly based on the work of one late grand-uncle of mine, Rev. Heinrich Tolkiehn) were, in short:

– My ancestors lived in Ostpreußen [East Prussia] (a part of Germany until 1945, the northern part which now belongs to Russia, as an exclave). The area belongs to the "lower German" language region since ca. 1200. Older languages, especially eastern idioms, were also present in the old days, but died out later.

– Our name was changed from the original Tolkien into Tolkiehn around 1800 (in principle we know the exact date and the person who did it, but I am presently not aware of it).

– The name Tolkien is a typical name only for the area of Ostpreußen. Many family names there end -ien (like Leptien, Monien, and so on), but the meaning of this ending is somewhat unclear (as far as I know). The first part of the name is derived from the word-base tolk and the name means a bi-lingual person, who can translate the old language (Prutzisch [a Baltic language]) to German. Today, the name is not very abundant, but present all over Germany, especially in the bigger cities of northern Germany. This is mainly due to the deportation of the population of that area after the second world war.

– We could not, however, find out any direct connection between our ancestors and the ancestors of the author in Lower Saxony. One reason may be, that in the area where my ancestors lived, the church-books were burnt as a consequence of some war (this date is in principle well known, I think it was somewhat later than the 30 years war[sic], i.e. later than 1648, but I would have to look it up). We did not make any research effort in lower Saxony.

I hope, I could be a little helpful and would of course appreciate any information about your findings.

My comment: Professor Tolkiehn from Germany and his letter were my first sources of the information about the true origins of the Tolkien family name. It was in 2010. In the meantime I visited Tołkiny village (German Tolksdorf, earlier Tolkyn/*Tolkien) in former East Prussia, I read a lot of material about the Old Prussian (Baltic) and German history of this land, I analyzed almost all Tolkiens and Tollkühns (in various forms like Tolkiehn, Tollkuehn etc.) which can be found in the genealogical sources, and finally thanks to Jerry Aurand I found the document which proved that Tolkiens came to London c. 1772 from Gdańsk (Danzig)! 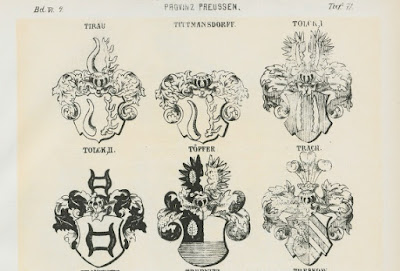 At the moment my opinion is that the Tolkien family name is derived from the village name *Tolkien (in 15th c. it was spelled Tolkyn; before 1945 Tolksdorf, today Tołkiny) which contains an Old Prussian element tolk 'an interpreter' (because the first Tolkiens were called Tolk, and they came to East Prussia – in 14th c. it was the State of the Teutonic Order – from Saxony, from Harz region. The Tolkiens earlier family name was Marklingerode. In the earliest records they were a noble family and they had the coat-of-arms – see above).

The Tolkiens in the 16th c. lived in the villages near Königsberg (today Kaliningrad) and probably in the end of the 17th c. they started their furrier business in Gdańsk (then in Polish-Saxon personal union) being still East Prussians with the family nest near Königsberg (in my opinion the main center of the Tolkiens was then Labiau n. Königsberg). According to my research the Tolkiens in Gdańsk were a small family. We know Michael Tolkien (from the and of the 17th c. and – maybe another one – from the mid-1700), we know also Christian Tolkien from Gdańsk (father of Daniel Gottlieb Tolkien from London and probaby father of Johann Benjamin Tolkien, the great great grandfather of J.R.R. Tolkien) and another Christian Tolkien (possibly another son of Chistian Tolkien) who stayed in Gdańsk after the Prussian invasion in 1797 and was not only an antiquarian but also the town hall official). He was the first person I found who germanized his Baltic family name from Tolkien ('village of the Tolk') to Tollkühn (meaning 'foolhardy') c. 1820.

It is possible that all Tolkiens, Tollkühns etc. are one big family with the East Prussian origins (in todays Poland and Kaliningrad Oblast)