Selena Hastings, Countess of Huntingdon (1707-1791) was an English religious leader who played a prominent part in the religious revival of the 18th century and the Methodist movement in England and Wales, and has left a Christian denomination – Countess of Huntingdon's Connexion in England and Africa. She played a major role in financing and guiding early Methodism (source: Wikipedia).

Two sources prove that John Benjamin Tolkien (b. 1752, Gdańsk, d. 1819, London – see my discovery of his act of baptism at Salvatorkirche, Petershagen, Danzig/Gdańsk) attended the early Methodist and Congregationalist "conventicles" of Selina Hastings in Spa Fields Chapel as early as 1779. The first of the sources is his own burial (I wrote about it here) in the same grave as William Shrubsole who was an organist at the Spa Fields Chapel (and who belonged to Lady Huntingdon's community), the other is the burial of John's first wife, Mary Tolkien, née Warner at the Spa Fields Chapel burial grounds (non-conformist register of Lady Huntingdon's community at Ancestry.co.uk). What we can say about John Benjamin's denomination is that in Gdańsk he was born in the Lutheran suburb with strong Mennonite influence and that in London he joined the early Methodist community with strong Calvinist influence which was important in the creation of the Congregational movement. His brother, Daniel Gottlieb Tolkien became a member of the City Road Methodist community (read about it here).

Mary Tolkien, née Warner (1753-1779), a daugter of James and Elisabeth was baptized on 18 March, 1753 at Saint Peter's, Paul's Wharf, the City of London. She got married with a German-speaking Gdańsk immigrant, Johann Benjamin Tolkien (1752-1819) on 29 April, 1777 at St James, Clerkenwell. Both Johann (John) and Mary were probably the members of Selina Hastings' community. They had two daughters (Anna Maria and Elisabeth – it is even possible that Elisabeth died in... Gdańsk – I must check this possibility) and they lived at St Andrew's parish, Holborn (it is probably the first English address of J.R.R. Tolkien's great-great-grandfather!). Mary was buried by the Spa Chapel burial grounds:

More about William Shrubsole can be found here ("Shrubsole, William (1760-1806)" in Dictionary of National Biography): 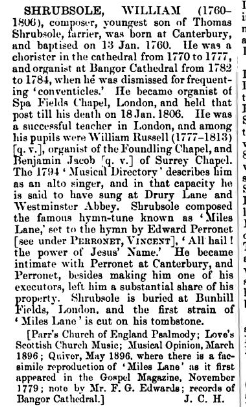