I have found a London clown, Boleno Marsh who was... Alfred John Tolkien, son of George William Tolkien and nephew of J.R.R. Tolkien's grandfather, John Benjamin Tolkien. So exciting is this #TolkienAncestry research! 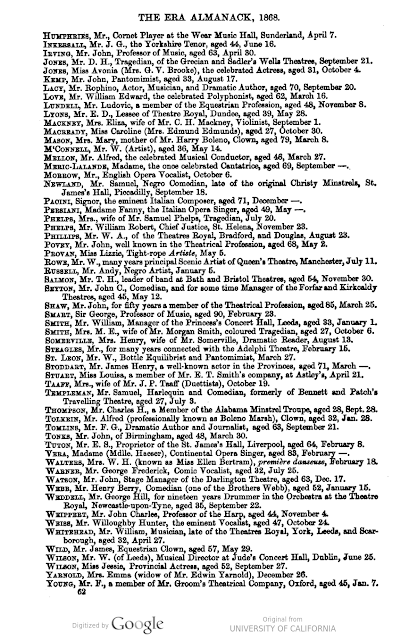 Boleno's early death was tragical. We can read about it in Merely Players by Harry Lindley (see here):


I jumped into my garments, awoke my best friend, the comedian and clown in perspective, in time to see the temple of Thespis, which had been the receptacle of so much joy and misery to the poor player, levelled to the earth. I looked blankly at my friend. He returned the same look. "The theatre is gone, I am so sorry," said I. "So am I," said he. Then suddenly, in tones of exaggerated quasi- sorrowfulness, he exclaimed : "Great Caesar, my new Blue Shape (Shakespearian coat) is burnt to death." After the fire I never saw him more, but I read of his death some few years later. He was Boleno Marsh, the clown, and died at Sadler's Wells during the run of the pantomime. Cause, use of chemical flake white as a cosmetic paint, at least coroner's jury brought it in so. It may be from the use of these pamts, as in the case of G. L. Fox, who first suffered from paralysis of the facial muscles, and, again, grease paints, may be one of the factors which has placed so many actors in lunatic asylums.