I would like to remind you one document which was already described on my blog and another one which I found out two weeks ago. Both documents come from the London archives and tell about the parents of Daniel Gottlieb Tolkien (1746–1813) and John Benjamin Tolkien (1752–1819) who lived in Gdańsk, until the end of the Polish-Lithuanian Commonwealth in 1790s.

(1) The first document which came to me thanks to my American friend, Jerry Aurand, is The Act of Naturalization of Daniel Tolkien (1794) which should be read together with Daniel Tolkien's obituary from The Methodist Magazine (1813): 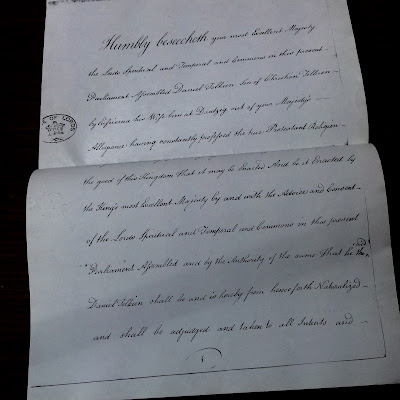 Daniel Tolkien, son of Christian Tolkien by Euphrisina his Wife
born at Dantzig
"Your Petitioner was born our of your Majesty Alliegian but hath constantly professed the true Protestant Religion and given Testimony of his Loyalty and Fidelity to his Majesty and the good of this Kingdom" 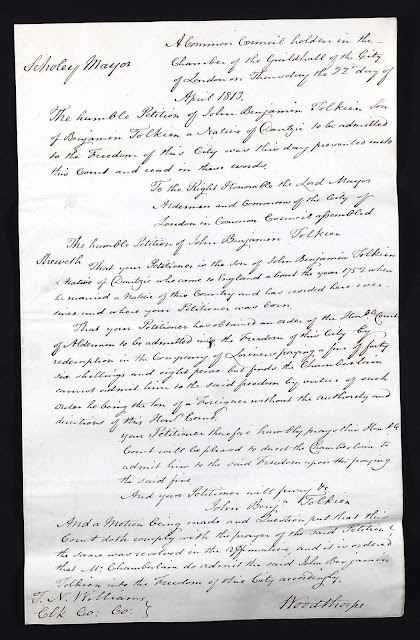 We find here John Benjamin Tolkien as a "native of Dantzic who came to England about the year 1752 [sic!] when he married a Native of this Country and has resided here ever since and where you Petitioner [J. B. Tolkien, the younger] was born". The Tolkien Junior made a mistake - his father was born in 1752 in Danzig (Gdańsk), he came to England about 1772 and married a native of England (Mary Warner) in 1777!

What is important, John Benjamin Tolkien, J. R. R. Tolkien's great-great-grandfather was described as a "Foreigner". In fact he was a foreigner in London until his death in 1819.