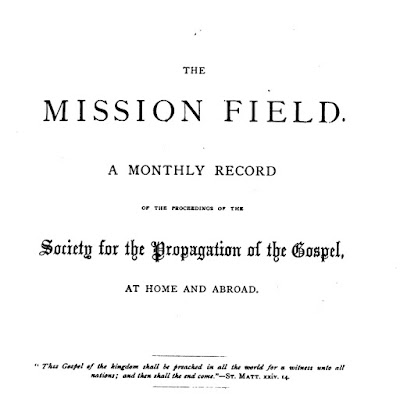 I still do not know in which church or chapel Arthur Reuel Tolkien was baptized in Handsworth, Staffordshire. I even do not know if he was born in Anglican, Independent, or non-religious family. But we do know that Arthur Reuel Tolkien was an Anglican in 1891 when he was a sponsor/witness of the Anglican adult baptism of his Unitarian fiancée, Mabel Suffield (see here – it was one of my most unusual discoveries!). Today I have found something really substantial. In the archival magazine The Mission Field. A Monthly Record of the Proceedings of the Society for the Propagation of the Gospel At Home and Abroad from 1896 we can read about J. R. R. Tolkien's father:

"And now on the 15th inst. [15 February 1896] we have lost one of our good, devoted business men, Arthur Tolkien, who was treasurer of our Diocesan Finance Board. I had hoped to propose him as a member of the Society (S.P.G.) [Society for the Propagation of the Gospel] before now."

And I will be not bombastic if I say that it is really something new. Now we can see the Professor's father as a member of the Bloemfontein's Diocesan Finance Board (Anglican) and a person known in the circles of the Society for the Propagation of the Gospel.

Let us remember that the Tolkiens in England were among the first subscribers of the Missionary Society, that the second generation of the Tolkiens sponsored the missions in other parts of the world, and that J. R. R. Tolkien, a devout Roman-Catholic took part in translation of the Jerusalem Bible in the UK. See Tolkien Gateway where we can read (see here):

The Jerusalem Bible is a Roman Catholic translation of the Old Testament of the Bible. Its sources were the original Hebrew and Greek texts, with some contribution from later Greek and Latin translations.

J.R.R. Tolkien was among its contributors, as translator and lexicographer. The extent of Tolkien's contribution to the translation of this book is uncertain, but he is thought to have worked on the book of Jonah, and possibly the book of Job as well.[1]
In Letter 294 to Charlotte and Denis Plimmer Tolkien stated:

Naming me among the 'principal collaborators' was an undeserved courtesy on the part of the editor of theJerusalem Bible. I was consulted on one or two points of style, and criticized some contributions of others. I was originally assigned a large amount of text to translate, but after doing some necessary preliminary work I was obliged to resign owing to pressure of other work, and only completed 'Jonah', one of the shortest books.