Were the Tolkiens from Birmingham Independents?

After John Benjamin Tolkien (1807–1896) married Mary Jane Stowe in 1856 (All Saints, Birmingham – Anglican; in spite they were Non-Conformists they had to register the marrige in an official church) they moved to Heathfield Road in Handsworth, Staffordshire. Great question of my #TolkienAncestry research is in which denomination Arthur Reuel Tolkien, the Professor's father was born. I am not able to find any church act concerning John Benjamin's and Mary Jane's children. And thanks to this Handsworth trace I have found a probable answer. 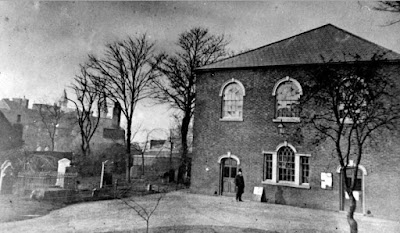 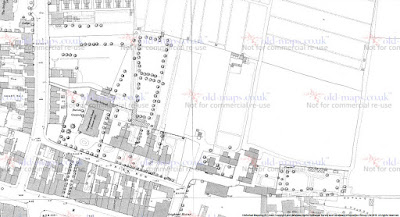 In the times of the Tolkiens in Handsworth this place was most important among the Non-Conformist communities:

"In Handsworth is a large Independent Chapel, which is called the Union Chapel, and was erected in 1788, but was improved and enlarged in 1818 and 1850. The Rev John Hammond is its minister, and attached to it is a burial ground. There is a Wesleyan Chapel in Perry Barr."


[From History, Gazetteer and Directory of Staffordshire, William White, Sheffield, 1851]

Congregational Chapel, Union Row, Handsworth. This photograph was taken in 1870. The chapel was remodelled and expanded by the pastor in residence a year after this image was recorded. The Rev. Robert Ann reopened the building as Handsworth Congregational Church on 24th September 1871. A century later the land was bought for £35,000 by the Birmingham Guru Ravidass Cultural Association. The land was cleared and the 'Shri Guru Ravidass Bhawar' Gurdwara was opened on 10th September 1972 by His Excellency Apa B. Pant.

Why we cannot find any baptism record of the children of John Benjamin Tolkien? This is the answer:

At the moment I suppose that the first Tolkiens in England being originally Pietist Lutheran from the "Fanatic" parish of St Salvator, Petershagen, Danzig (Gdańsk) joined the Methodists in London – Daniel G. Tolkien joined Wesleyan Methodists and John B. Tolkien joined Lady of Huntingdon's Connexion but died as an Independent inclined to the Moravian Brothers. In London and Birmingham some Tolkiens joined the Freemasonry (United Grand Lodge of England) but John Benhamin Tolkien (1807–1796) was inclined to the Independent Congregationists and he baptized his children in the Union Chapel, Handsworth. The documents did not survive and today we have only the church books from the years 1788–1837. Arthur Tolkien in South Africa cooperated with official Anglican Church (see here – the same did probably his London grandfather, George Tolkien). The Tolkien family in Birmingham were buried at Key Hill Cemetery (Non-Conformist), see here.
Autor: galadhorn o 03:58