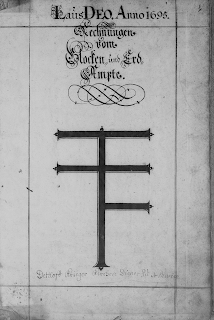 It has been an important day in Wroclaw. I visited the Mormon center where I could make my research in the church books from St. John, St. Cathrine and St Mary from the years 1700-1770. I wanted to find the baptism acts of Daniel Gottlieb Tolkien, Johann Benjamin Tolkien and Christian Tolkien. I have found much more. I met nice people with the same genealogical passion. And I have new puzzles.

I was looking for Daniel Gottlieb, Johann Benjamin and Christian, possible sons of Christian and Euphrosina Tolkien.

The Tolkien records can be found in the church books from the main Gdańsk church (before 1945 Lutheran, after the war the Catholic cathedral; on the left its sign) – St Mary (Bazylika Mariacka, Marienkirche). Fortunately there are indexes in these books. All Tolkien records are related to Master Furrier, Michael Tolkien (1708-1795) and his wife Euphrosyna, neé Matthissen (ok. 1727-1783):

Eight names and eight puzzles. The last Christian is most likely Christian Tolkien (1762-1821), the Gdańsk antiquarian and clerk buried on the St Mary cemetery. Dorothea Constantia is most probably Constantia Dorothea who in 1766 became wife of Andreas Übelin (from the furriers' family in Gdańsk).

The most important question is if we can see here Johann Benjamin Tolkien (1752-1719), Professor's great-great-grandfather. And where is Daniel Gottlieb Tolkien (1746-1813)?

In 1794 in London Daniel wrote that his father was Christian Tolkien and mother was Euphrosina (see Act of Naturalization). Was he son of Christian Tolkien who was a witness during Anna Elisabetha's baptism? Was that Christian, Michael's brother who had also wife of the same name Euphrosina? Or maybe Daniel Gottlieb's mother died giving birth to Daniel and his father died after 1746 and Daniel was adopted by Michael Tolkien, a Gdańsk Furrier?

Is our Johann Benjamin Tolkien this Johann Daniel Tolkien from 1752? It is not rare that people receive diffrent names during baptism and use another ones in their family life. The name Benjamin has special significance ("The «Benjamin of the family» is a phrase used in several languages to refer to the youngest son - especially when he is much younger than his brothers; sometimes the name is chosen for a son born to mature parents unlikely to have more children, especially if he has several older siblings. Both of these usages derive from the biblical son of Jacob of that name, who occupied that position in his family." – Wikipedia). Maybe Benjamin Tolkien, born in 1760 died soon and the parents started to call Benjamin their John Daniel – especially if they adopted another Daniel?

There are many more possiblities. Who knows, maybe Daniel Gottlieb was illegal son of Michael's brother, Christian and Michael's wife, Euphrosina? (dear Euphrosina Tolkien, forgive me if it is not true!) If so there is a possibility of the conflict in the Tolkien family in Gdańsk: adult Daniel Gottlieb discovers he was not Michael's son and he flees with his brother Johann to England to start new life far from the family...

Many questions, new things to study...