Tolkien and Tolkin are extremely rare family names in London before the Tolkien brothers, Daniel Gottlieb and Johann Benjamin came there from Polish Gdańsk before 1777. I am always very excited when I find a Tolkien in the London records from before 1777.

The only other Tolkin I found in London at that time is Daniel Tolkin from 1726 who was made "free to this City"* on 19 October 1726. He cannot be the same Daniel Gottlieb Tolkien who immigrated to London from Gdańsk, because the last one was born in 1746 or 1747. Our Daniel Tolkin from 1726 became a member of the Company of Needlemakers.

This Daniel Tolkin is not necessarily an immigrant from Gdańsk or Germany. As we could see below (see my last post) the Tolkyn/Tolkin family lived in Kent (Rye, Snorgate, Lydd, Canterbury) since the 15th century (I have not yet estimated their roots). 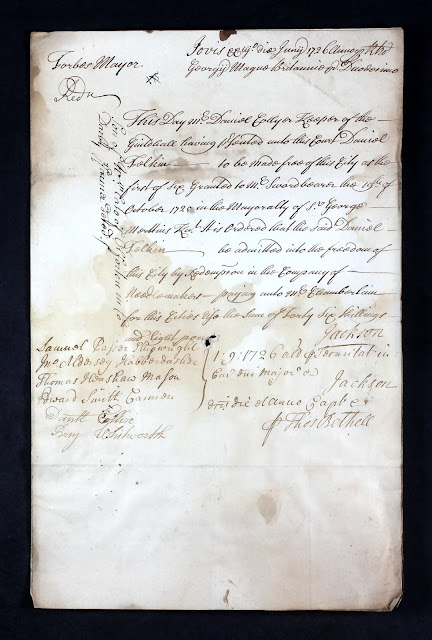 * This database contains papers associated with application for "Freemen" status. Historically, freedom papers go back to royal charters granted for the privilege to market, trade, or conduct business. Livery Companies (which originated in guilds) are associations of craftsmen whose members can earn Freemen status and who regulated their trade by controlling wages, labor conditions, and admission by apprenticeship. When an individual is granted Freedom papers they are made "Free of the City of London." (from Ancestry.co.uk)
Autor: galadhorn o 07:55