I would like to remind you my study of the Tolkien family coat-of-arms (see here). Today I am more sure than ever that TOLCK II, TOLKIEN is the coat-of-arms of the ancestors of J.R.R. Tolkien who were a noble family in East Prussia in the sixteenth century (according to J. Siebmacher's Wappenbuch. Ausgestorbener Preussischer Adel, Vienna 1878): 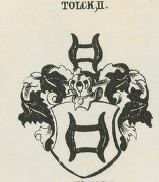 Can you help me to describe it according to the art of blazoning? The shield is white, the figure is "Fassleiter" or barrel racks. A very Hobbit-like coat-of-arms, isn't it?


Of course the coat-of-arms of Tolck II., Tolkien is a variation of the older coat-of-arms Tolck I. and Marklingerode. Its oldest known form comes from the 14th century: 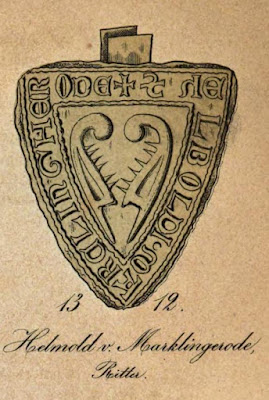 I have not found any legend connected with these barrel racks... (or fish teeth). And I want to remind that the family of Marklingerode came to Prussia from Harz in the 14th century, and Harz was part of... SAXONY in the 19th century!
Autor: galadhorn o 03:27