The Tolkiens' Gdańsk: a map 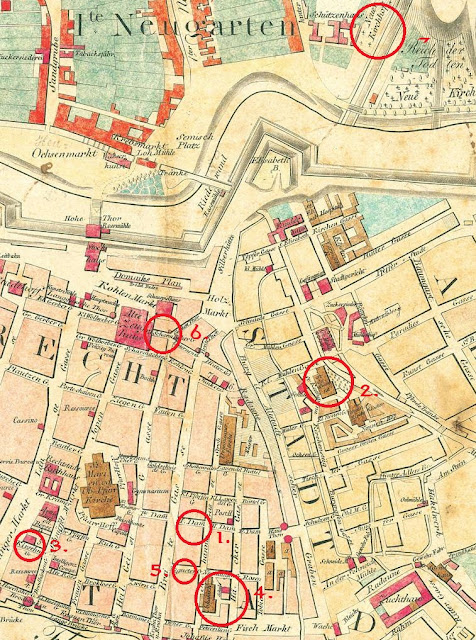 A kind of the graphic summary and a guide for all these who want to visit Gdańsk following the footsteps of the early Tolkiens (1700-1821). I have used a map of Gdańsk (then German Danzig) from 1807-1820.

1. A possible house of the Tolkien family in the 1700s at 16 Grobla II. (German: Zweiter Damm No. 16). I suppose that Daniel Gottlieb (1747-1813), Johann Benjamin (1753-1819) and Christian (1762-1821) were born here. Their mother, Euphrosina Tolkien lived at Damm Street untill her death in 1783. This house is the only one on this street where in the beginning of the 19th century there was a furrier workshop (and we know that the Tolkiens in Gdańsk were a famous family of the furriers).

2. St Catherine Lutheran church (St Katharinenkirche) where Michael Tolkien (a master-furrier), Euphrosina Tolkien and other members of this family are buried (graves nos. 37, 48 and 84). 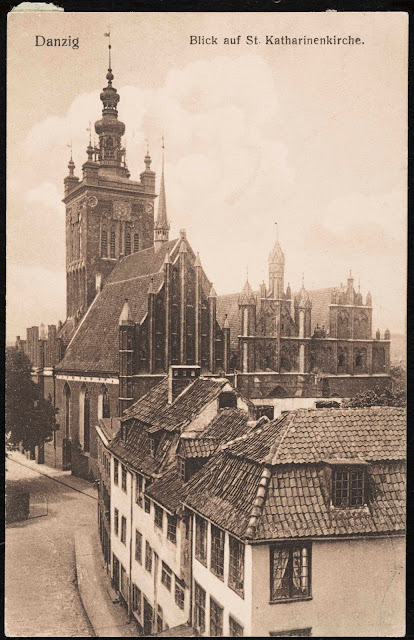 3. A possible place of the Kürschner Gewerkshaus (Furrier Guildhouse) on the corner of Długi Targ and Kuśnierska (Langer Markt and Kürschnergaße 'Furrier Lane'). This beautiful barock house was also called Gildehaus.
4. St John's church (St Johanniskirche) or a place of the Lutheran baptisms of the Tolkien family in Gdańsk. It is still not proofed that Daniel Gottlieb and Johann Benjamin were baptized here (the church books from the period of the mid-18th century are not yet digitalized) but I am waiting for the confirmation from the adminitration of the Mormon church from Salt Lake City. Christian Tolkien baptized here his daughters in the end of the 18th century. Is the vocation of this church the source of the "John" naming tradition in the Tolkien family?

7. Christian Tolkien's grave on the St Mary Church cemetery on the outskirts of Gdańsk where he was buried in 1821. The cemetery doesn't exist any more.