Niederpreußisch – the language of Tolkien's ancestors 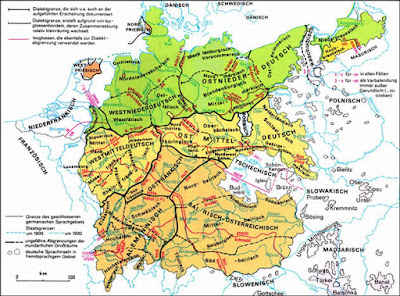 About Low Prussian dialect of the German language you can read on Wikipedia – here.

Both Tolkien's family name (see the article on its etymology: *tolk-īn 'son or descendant of Tolk', here) and the language of Tolkien's ancestors are Low Prussian.

Low Prussian or Niederpreußisch, sometimes known simply as Prussian (Preußisch), is a dialect of East Low German that developed in East Prussia. Low Prussian was spoken in East and West Prussia and Danzig up to 1945. It developed on a Baltic substrate through the influx of Dutch- and Low-German-speaking immigrants. It overruled Old Prussian, which then became extinct in the 17th century.

Plautdietsch, a Low German variety, is included within Low Prussian by some observers. Excluding Plautdietsch, Low Prussian can be considered moribund due to the evacuation and forced expulsion of Germans from East Prussia after World War II. Plautdietsch, however, has several thousand speakers throughout the world, most notably in South America, Canada and Germany.

It is how Niederpreußisch sounds:

And this is the most famous poetic composition in Low Prussian, Anke Van Taraw by Simon Dach (17th century):