According to the Tolkien family legend...
Legends vs. facts


Ronald was sturdy and handsome, with his fair hair and blue eyes - ‘quite a young Saxon’, his father called him.

The most romantic story is described later in the Biography:

There was, however, Ronald’s Aunt Grace, his father’s younger sister, who told him stories of the Tolkien ancestors; stories which sounded improbable but which were, said Aunt Grace, firmly based on fact. She alleged that the family name had originally been ‘von Hohenzollern’, for they had emanated from the Hohenzollern district of the Holy Roman Empire. A certain George von Hohenzollern had, she said, fought on the side of Archduke Ferdinand of Austria at the Siege of Vienna in 1529. He had shown great daring in leading an unofficial raid against the Turks and capturing the Sultan’s standard. This (said Aunt Grace) was why he was given the nickname Tollkuhn, ‘foolhardy’; and the name stuck. The family was also supposed to have connections with France and to have intermarried with the nobility in that country, where they acquired a French version of their nickname, du Temeraire. Opinion differed among the Tolkiens as to why and when their ancestors had come to England. The more prosaic said it was in 1756 to escape the Prussian invasion of Saxony, where they had lands. Aunt Grace preferred the more romantic (if implausible) story of how one of the du Temeraires had fled across the Channel in 1794 to escape the guillotine, apparently then assuming a form of the old name, ‘Tolkien’. This gentleman was reputedly an accomplished harpsichordist and clock-repairer. Certainly the story -typical of the kind of tale that middle-class families tell about their origins - gave colour to the presence of Tolkiens in London at the beginning of the nineteenth century, making their living as clock and watch manufacturers and piano-makers. And it was as a piano-maker and music-seller that John Benjamin Tolkien, Arthur’s father, had come to Birmingham and set up business some years later.

The Tolkiens were German in origin; they came from South Germany and belonged to the Hohenzollern family, members of which became Electore of Brandenburg and eventually Emperor of Germany. They acquired the name Tolkien, or tollkühn, at the Siege of Vienna in 1683. My ancestor was a cavalry officer and in those days when autumn came and the bad weather set in, you put pegs in the ground to mark your position for the following year's campaigning and then went home for the winter. My ancestor didn't. The following night he took his cavalry regiment out and turned all the Sultan's tents upside down. This earned him the nickname of 'tollkühn' or 'foolhardy'; 'temeraire' is the French version of it. When my nephew, Simon, was at Downside, he met some boys from France with the surname Temeraire. "Are you Tolkien?" they asked, "We're Temeraires, so we must come from the same ancestors.". We hope that the family hasn't lost the virtue of being foolhardy.

The Tolkiens backed the wrong side in the war between Frederick the Great of Prussia and the Empress Maria Theresia of Austria and had their castle burned over their heads. As a result some of them came to England and settled in London, changing the name to how it is spelt now. Up to the First World War they maintained contact with those that remained in Germany. In 1939, when Germany invaded Poland, the first Gauleiter of Danzig was a Tollkühn. The family in England developed the upright piano; I found two when I was in North Staffordshire. They were made of wood and were much shorter than the present upright piano. Eventually they became successful manufacturers of them in Birmingham.

[I want to thank John Garth for this interesting information]

This legend must have been very vivid in the Tolkien family. Professor's son, Michael H.R. Tolkien in 1967 wrote this inscription in his own book (source): 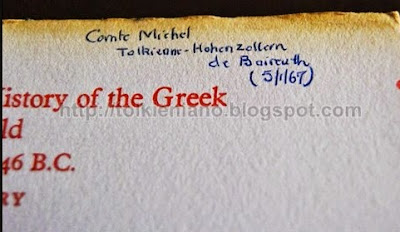 Michael Tolkien describes himself as the an 'Earl' of the Hohenzollern family from Baireuth, Bavaria. This is the legend...

... and what we know as the facts at the moment? This is the summary of my research:


The Tolkiens origin is complex: German (Saxon and Prussian), Polish and very remotely also Baltic (Old Prussian). And they came from North East Germany, not from South Germany. The form Tolkien (of Baltic and Polish origin) is older that its variants Tollkühn, Tollkuehn, Tollkiehn (which seem to be 'germanization' and 'pseudo-etymology' of the form Tolkien). It first occurs in Duchy of Prussia (under the Hohenzollern rule) in the 16th century in the villages close to Koenigsberg, and this is the main region of the Tolkien family name occurence before the Second World War. It is supposed that Tolkien comes from earlier Tolkyn and Tolkin, the form of the name of the noble family Tolk von Marklingerode of the Saxon origin with their goods in East Prussia (Bartenstein, Rastenburg and Koenigsberg areas) in the 14th and 15th centuries. This form means 'a village of Tolk (tolk is Prussian/Middle German term for 'translator')' and it belonged to the small village Tolksdorf (today Tołkiny) in East Prussia (today in Northern Poland). The story how a Saxon knight Matthias Tolk von Marklingerode, a translator in the Balga office of the German Order founded Tolksdorf/Tołkiny is well known and was told in another post on the Tolknięty blog.

Last war changed all, and the Tolkiens, Tollkühns, Tollkiehns from East and West Prussia etc. must have emmigrated to Brema, Hamburg, Hannover etc. (we have found only one Tollkuehn in the Polish registers from 1990s!). The first occurence of the 'germanized' form Tollkühn is registered in the documents connected with the possible brother of the first Tolkiens in England – with Christian Tolkien (vel Tollkühn) from Gdańsk (Danzig), 1752–1821. Before the Prussian invasion and the partition of Poland the Gdańsk furriers family was always called Tolkien! After the Hohenzollern invasion the economical situation in Gdańsk was so bad that many manufacturers and tradesmen emmigrated to the other parts of Germany or even to the United Kingdom. This was the fate of Daniel G. Tolkien and Johann (John) B. Tolkien, furrier and clockmaker from Central London (City and Westminster) in the 18th and 19th centuries.


Daniel Gottlieb Tolkien (1747–1813) and his younger brother Johann Benjamin (1753–1819) were born in Gdańsk (Danzig) during the reign of Augustus III of Poland. They left Gdańsk probably in or after 1772 (the first London document with the Tolkien family name comes from 1777 ˜– the wedding of John Benjamin Tolkien with Mary Warner). Their emmigration must have been connected with the First Partition of Poland. Their brother (?), Christian Tolkien (1752–1821) stayed in Prussian Danzig. Maybe the family was separated because of the pro- and anti-Prussian sentiments? The London Tolkiens stayed to be Tolkiens. The Danzig Tolkiens became 'germanized' Tollkühns...