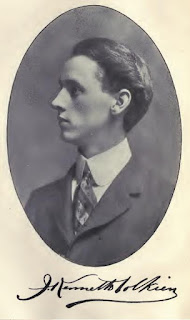 The Tolkiens were like the Tooks. I can tell a lot about their migrations from Prussia to Poland, then to England, Canada, the USA, etc.

This young man on the left was an American painter (and by the way a poet). His name was James Kenneth Tolkien. His verses were quite similar to J. R. R. Tolkien's poetry. You can read some of them on the blog of my friend, Jason Fisher (see "Seldom-read early poetry by Tolkien").

One of Daniel Gottlieb Tolkien(*)'s sons was James Tolkien (1800, London – 1855, Ontario, Canada). James like other members of his Methodist family emigrated to Canada where the Tolkiens were evangelists. He and his Canadian wife had three children: Daniel Witherspoon Tolkien, Frances Ann Cuthbert and Charles C. Tolkien. Daniel Witherspoon Tolkien (1846, Ontario – 1925, Buffalo Ward, NY, USA) had seven children with his wife Mary Lucinda, née Shurtlef. One of their sons was James Kenneth Tolkien (1881, Ontario, Canada – 1925, Los Angeles, USA). He arrived in the USA in 1904 and he lived first James Kenneth Tolkien lived in Erie, New York (1920) and then in Inglewood, California. He had only one child with his wife Julia K. Tolkien – Carl E. Tolkien (1909, New York – 1987, Los Angeles).

There are many interesting members of the big Tolkien family (another interesting person was Professor Johannes Tolkiehn from Koenigsberg, a distant cousin of J. R. R. Tolkien)