I have found another element of the Tolkien Ancestry puzzle! I have found the funeral act of Christian Tolkien and his wife Euphrosina. And I have proved that Christian is Michael Tolkien's brother, and that he was born in Kreuzburg, East Prussia and Michael's and Christian's father was another Christian, a rich miller from Kreuzburg!

My last visit to the Family History Center (by the Mormon Church) in Wrocław and today's deeper search in the church books from St Salvator, Gdańsk have succeeded. I have found Christian Tolkien's and Anna Euphrosina's funeral records in St Salvator, Petershagen (Zaroślak), Danzig (Gdańsk). See what is my most recent discovery:

Christian Tolkien died in October 1791 in his 85 in Petershagen (Zaroślak) and was buried in the "N.K." or Neuer Kirchhof ('New Cemetery'). If so, he was born in 1706 what is exactly in accordance with this act of baptism from Kreuzburg from 8 May 1706: 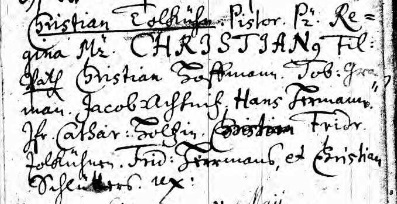 What is interesting the Tolkien family name of Christian was spelled Tolkühn in Kreuzburg and Petershagen. But we also know other examples:

Tollkien in the record of his son's, Daniel Gottlieb's baptism from 18 July 1746:

But in the record of his second son, Johann Benjamin Tolkien from 11 June 1752 we can see even more germanized version of the family name – Tollkühn:

The same with Christian's and Anna Euphrosina's daughter who was baptized on 10 June 1756 where we can find again Tollkühn: 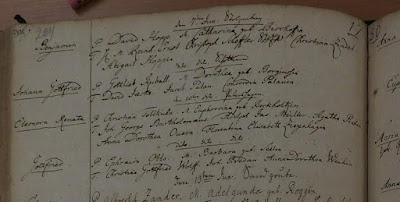 It is in accordance with J.R.R. Tolkien's statement that his family name was spelled Tollkühn before the emmigration to England. But the history of the Tolkien family name proves that the earlier form was Tolkin and Tolkien and that this name is of Old Prussian (Baltic) origin. Stated that J.R.R. Tolkien's line has its origins in Kreuzburg, East Prussia we can say that we can be sure who were his ancestors up to Michel Tolkien from 1590 (see here).

Christian and Anna Euphrosina Tolkien from Petershagen, Gdańsk were described in The Methodist Magazine from 1813 as "respectable and religious parents" (see here). It is possible they belonged to the Pietist community of the Herrnhut Brotherhood (see here).

From the document we see that Anna Euphrosina Tolkien was born in 1719 and died in May 1792. She was buried with his husband eight months after his funeral – on 3 June 1792.

Let us see few pictures of the place where J.R.R. Tolkien's ancestors lived and worked: