And now, that I have concluded these concise remarks with reference to my ancestry, I leave it to those who read, to decide my position as regards nationality. I may sing out the "Marseillaise," or the "Wacht am Rhein," and still be patriotic, or, for a variety, chant the "Rule Britannia," "The Maple Leaf Forever," the Holland "Vaderland," the Scotch "Scots Wha Hae" and "The Star Spangled Banner" enjoying with each that inspiring enthusiasm that causes an electric current to vibrate in the spinal column that patriots, only, are capable of feeling. I may love all men, and sympathize with them in their thoughts, feelings and desires, provided that such are founded on justice and goodness to all mankind.


About an American poet, James Kenneth Tolkien (1881–1925) I have already written on my blog (see here). James Kenneth was a distant cousin of J. R. R. Tolkien (both were descendants of two Tolkien brothers from Danzig/Gdańsk, Poland who emigrated to London in c. 1770) and the Professor had a correspondence with this branch of the Tolkien family living in the USA. Let us see a fragment of the introduction  ("Snapshots of early days") to the collection of his poems entitled The Poetical Works. Specially interesting are the adventures of his great-grandfather, Major and Doctor James Tolkien who lived a life of a "Robinson Crusoe" in West Indies for a short time. We can also find the source of J. R. R. Tolkien's theory about his Lorraine ancestry. We know from the letters that J. R. R. T. found his distant American cousins and that he had a correspondence with them concernin the ancestry of the Tolkien family. 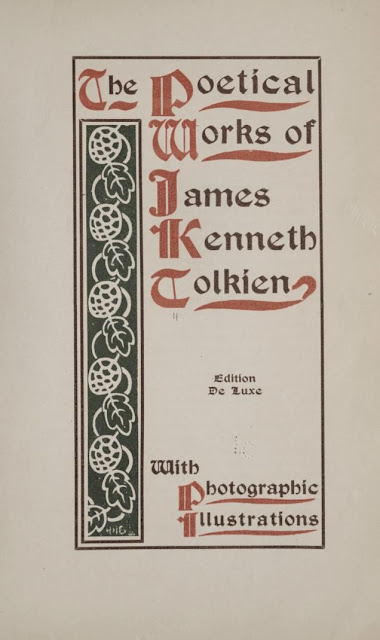 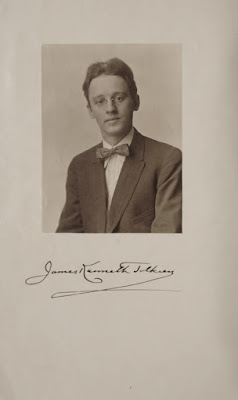 "On my father's side. I am descended from an old Alsace-Loraine family (Note 1). Nearly two centuries ago two brothers, Daniel and Henry Tolkien (Note 2), left the land of their fathers and settled in London, England, with a fairly good start, financially. Daniel chose, for his investment, the fur business, while Henry fancied he could get more notes out of the music business (Note 3). Report has it that both made good, however, and today there is a piano in England bearing the name of Tolkien. But, we'll stay by Daniel, as he is in direct line, being my great-grandfather. He married into an English family. His wife presented him with several children (Note 4), one of whom was James Tolkien, who grew to manhood and entered the British Navy as Surgeon (Note 5). After many adventures on sea and land he was finally cast on one of the West Indies, the cruiser on which he had sailed having been totally wrecked. The natives greeted him a little too warmly for his liking and he did not altogether relish the way in which they scrutinized him. He related afterwards that it was undoubtedly their intention to make a meal of him. Their superstition, however, was his safety; for, being a physician of no mean reputation among those of his own nation, and, with the experience he had acquired among sailors and soldiers afflicted with fevers or maladies peculiar to those tropical regions he was enabled to cure many of the natives who were stricken at that time. Seeing the results of his skill and the speedy recovery of those whom they had believed lost, they immediately hailed him as a great healer and a divinity. Dr. Tolkien was at last picked up by a passing schooner and delivered once more into civilization. Soon afterwards he received his release of honor from the Navy and entered a detachment of the standing Army which was sent to Canada at the time of the Rebellion of '37 (Note 6). He was among those stationed at Kingston, Upper Canada.

Twenty miles distant lived one, Miss Bell, whom he chanced to meet when on a professional call. Miss Bell was of Scotch and Holland descent. Her mother's family, the Van Valkenbergs, are traced to that portion of the Eastern States made famous by the Knickerbockers. They were U. E. Loyalists and emigrated to Canada shortly after the Revolution. At the termination of the Rebellion Dr. Tolkien and Miss Bell renewed their acquaintance, which resulted in his leaving the Army and becoming a married man at the age of thirty-eight. He made a home in Bath, Ont.[ario], where he worked up a practice as physician and surgeon, but afterwards moved to Sydenham, a few miles distant, in which village my father, Daniel Tolkien, was born (Note 7). My father's parents died when he was very young, and, at an early age, he went to live with an uncle, from whom he obtained his knowledge of farming, which occupation he followed until shortly after my birth.

My mother, whose maiden name was Shurtleff, is a descendant on her father's side, from an old English family, the original name being Shire-cliffe , but which has become vastly changed by time. They were a proud people, but I do not believe they were haughty, for they were of that English type whose pride was based on honor and good name, rather than station. On her mother's side we have, in the family of Miles, a direct descent from the Pilgrim fathers, and later American Revolutionists upon which fact my great-grandfather, Rev. Stephen Miles, was never inclined to keep silent. And here I cannot resist going briefly into his history, for he and his son, Elijah, were the only printers in the family, with the exception of myself. Rev. Stephen Miles was born in Royalton, Vt., October 19th, 1789. He bound himself out to Mr. Nahum Mower, proprietor and publisher of The Postboy and Vermont and New Hampshire Federal Courier, at Windsor, Vt. In 1807 he went with Mr. Mower to Montreal, Canada, and in May of that year assisted him in establishing the Canadian Courant there. In the year 1810 Mr. Mower made him a present of enough material for a printing plant, so he proceeded to Kingston, U. C., the journey from Montreal to that place then occupying twelve days, and, in September, issued the first newspaper printed in Kingston and the third in Upper Canada, called the Gazette, of which he became editor. In 1813 the two other existing printing establishments in Upper Canada, one at Newark and the other at York, were destroyed by fire, the papers ceased publication, and Mr. Miles' paper, the Gazette, remained the only journal published to the west of Montreal up to 1816. In 1818 he disposed of the office and the good will of the paper, and after serving on one or two other journals, commenced in 1828 the Gazette and Religious Advocate, of which he continued editor and proprietor until 1830. He then undertook the management of the Canadian Watchman, and in the following year moved to Prescott, where he founded and edited the Grenville Gazette, the first paper published in that place. In 1833 he disposed of that paper, returning to Kingston, where, after some slight connection with one of the papers, he was, in 1835, received into the Methodist Church as a traveling minister, the duties of which he discharged until he was superannuated. At this time he was considered the oldest living journalist in Canada. He was finally overtaken by old age and blindness, and in December, 1870, was borne to his last resting place.

And now, that I have concluded these concise remarks with reference to my ancestry, I leave it to those who read, to decide my position as regards nationality. I may sing out the "Marseillaise," or the "Wacht am Rhein," and still be patriotic, or, for a variety, chant the "Rule Britannia," "The Maple Leaf Forever," the Holland "Vaderland," the Scotch "Scots Wha Hae" and "The Star Spangled Banner" enjoying with each that inspiring enthusiasm that causes an electric current to vibrate in the spinal column that patriots, only, are capable of feeling. I may love all men, and sympathize with them in their thoughts, feelings and desires, provided that such are founded on justice and goodness to all mankind.

Notes
Note 1. In fact the Tolkiens are of Prussian ancestry and two generations of James Kenneth Tolkin's (and J. R. R. Tolkien's) family lived in Danzig (Gdańsk) before they moved to London. The oldest known ancestors of these two writers lived in the village of Globuhnen near Kreuzburg in the Kingdom of Prussia (today in the Kaliningrad Oblast).

Note 3. In fact John Benjamin Tolkien was first a watch- and clockmaker (Gravell & Tolkien manufacturers) and finally before his death he was a china and glass seller.

Note 5. I have find him in the The Sporting Magazine (November 1831, vol IV, no. XIX, p. 57, see here) where we can read about the meeting of the Royal Sailing Society. During the meeting the Secretary of the Society proposed to enrol the name of a Major Tolkien among the Honorary Members of this Institution. "He therefore proposed that Major Tolkien, Mayor of Teignmouth who had saved the crew of a French brig bound from Bordeaux to Dunkirk when in imminent danger of perishing should become an Honorary Member of the Society" (see here).