More thoughts on tolk and tollkühn 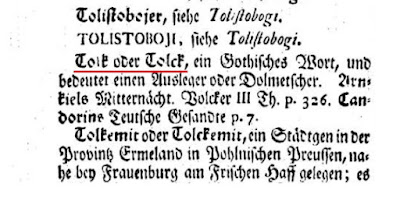 It is a nice though archaic and improper interpretation of the German noun Tolk (archaic spelling Tolck). According to Johann Heinrich Zedler's Grosses vollständiges Universal-Lexicon Aller Wissenschafften und Künste. Band 42, Leipzig 1744, Spalte 1127–1128, the noun Tolk or Tolck, 'translator; interpreter', was a word of Gothic origin (sic!). Today we know (and J. R. R. Tolkien knew it too) that this German term was of Balto-Slavic origin. In Middle Low German there is a noun of the Baltic-Slavic origin: tolk, tollik (Schiller-Lübben 3, 571ᶜ), 'dolmetsch, interpres; translator, interpres'; (Dief. 305ᵃ. nov. gl. 219ᵇ. Stieler 2249, pers. reisebeschr. 1, 4, 6, entlehnt aus lit. tulkas, lett. tulks Kluge⁵ 74ᵇ. vgl. Freytag ges. werke 16, 429). Professor Tolkien wrote about it in one of his letters to Mrs. Edit R. Ehrhardt née Hahn (1905–1997), wife of Rev. Arnold Ehrhardt (1903-1965) (who was an anti-Nazi pastor of half-Jewish ancestry. The Ehrhardts emmigrated to England in 1939 because of the Nazi terror. Mrs E. R. Ehrhardt was an editor and author in England. Arnold Ehrhardt was born in Konigsberg, East Prussia):

»I do not understand why you should wish to associate my name with TOLK, an interpreter or spokesman. This is a word of Slavonic origin that became adopted in Lithuanian (TULKAS), Finnish (TULKKI) and in the Scand. langs., and eventually right across N. Germany (linguistically Low German) and finally into Dutch. It was never adopted into English.«

Today, after my discoveries of the #TolkienAncestry we know that Mrs Ehrhardt was right and J. R. R. Tolkien unfortunately was not (see for example here)

This term was even adopted into (Middle) English and Tolkien knew about it (and probably he forgot about it during writing the letter to Mrs. Ehrhardt). See the late 14th century Sir Gawain and the Green Knight and occuring there the noun tulke, tolke, 'a man, soldier' (plural tulk(k)es), coming probably from Old Norse tulkr (see above; ultimately < Old East Slavic тълкъ < from Proto-Slavic *tъlkъ). It is interesting how the meaning changed from 'interpreter' to 'soldier'...

Johann Heinrich Zedler's Grosses vollständiges Universal-Lexicon Aller Wissenschafften und Künste from 1744 thought that German Tolk was of Gothic origin. That would be interesting for Professor Tolkien who studied Gothic (East Germanic language) and even tried to create Neo-Gothic and Taliska, being in fact a Gothic-stylized language of Middle-earth.

Historical Goths (Gothic Gut-þiuda, Latin Gothi) were an East Germanic people, two of whose branches, the Visigoths and the Ostrogoths, played an important role in the fall of the Western Roman Empire. Sometime around the 1st century AD, Germanic peoples may have migrated from Scandinavia to Gothiscandza, in present-day Poland. The earliest known material culture associated with the Goths on the southern coast of the Baltic Sea is the Wielbark culture, centered on the modern region of Pomerania in northern Poland. This culture replaced the local Oxhöft or Oksywie culture in the 1st century AD, when a Scandinavian settlement developed in a buffer zone between the Oksywie culture and the Przeworsk culture. Johann Heinrich Zedler knew about it in 1744. See his entry about Goths: 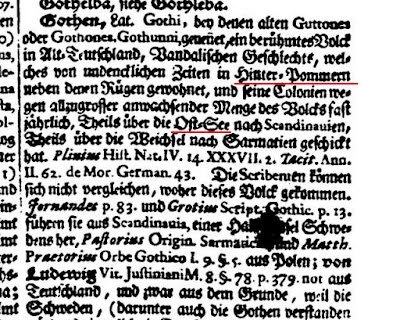 According to Zedler and other scholars of the 18th and 19th centuries the town Danzig, Polish Gdańsk had a place-name of Gothic origin. See here: 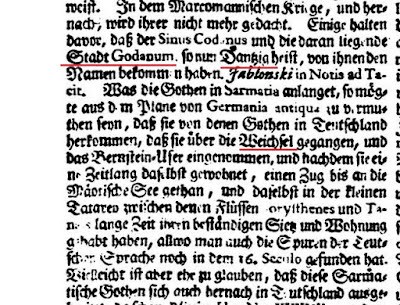 According to the lexicon from 1744 the place-name Gdańsk-Dan(t)zig was derived from Godanum. In a similar manner Friedrich Gottlieb von Duisburg (his father was a Gdańsk pastor of Michael Tolkien's son-in-law, Andreas Uebelin) in his Versuch einer historisch-topographischen Beschreibung der freien Stadt Danzig (1809) wrote that Gdańsk-Dan(t)zig was derived from Gothiskandza 'Goths' Redoubt' (see Wikipedia).

Zedler did not know about Old Prussian and earlier Slavic etymology of the word Tolk (Tolck), 'interpreter, negotiator, translator'. He interpreted it as Gothic which is a nice coincidence if we consider the Gothic-related interests of J. R. R. Tolkien.

And last but not least, let us see what Johann Heinrich Zedler's Grosses vollständiges Universal-Lexicon Aller Wissenschafften und Künste wrote about the word tollkühn (we know that J. R. R. Tolkien promoted this improper etymology of his family name). The lexicon provides us with this explanation:

German unsinnig ('absurd, ridiculous') or rasend ('tremendous, furious'), and even Latin mente coptus ('insane, mad; "seized by the mind")! Not a good candidate for a family name. Really!

The linguists of German language know that the Tolkien/Tollkühn family name is of Old Prussian (Baltic) origin and that its oldest form was Tolkin/Tolkyn, which means 'a descendant of an ancestor with the name Tolk', 'tolk' being (as we could see) an Old Prussian (Baltic, not Germanic) translator, interpreter, negotiator.

As a consolation let us see Zedler's entry for Tollkühne: 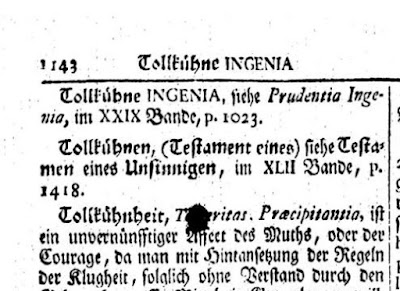