Elvish with Balto-Slavic sound
and the matter of Laūmas 'Elves' 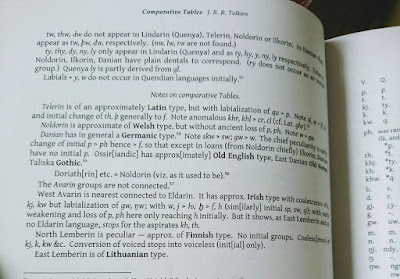 »East Lemberin is of Lithuanian type.«

And he provided us with the phonological tables with the sound changes is many Elvish dialects and languages, among them in East Lemberin. In the post-LoTR-stage East Lemberin would be called East Avarin. If so East Avarin was of "Lithuanian" type (it means Baltic type or even Balto-Slavic type, because in the time the tables were created – in c. 1937 – the term "Baltic" was not popular among the linguists). How do you imagine East Avari Elves? David Salo, a famous Tolkienian linguist from the US who created the dialogs in the languages of Middle-earth for the Jackson's films wrote to me on Facebook:

I've done some work in that vein. But I should note that the phonological developments Tolkien notes are not strictly Balto-Slavic (though they are satəm); the main similarity is the simplification of consonant phonatiion contrasts to a simple voiceless/voiced contrast (but this is also like Iranian languages). Everything else, especially the development of the vowels, is similar to Indo-Iranian. There is no indication that anything like a RUKI rule operates (note that the only reflex of *s noted is /s/).

And later (when I asked: And how would you reconstruct Quendi in East Avarin? And maybe you have an idea about: Elen síla lumenna omentielvo? in East Avarin?):

Quendi would be Čandī, most likely. The other depends on a variety of developments which I'd have to think about (there's no guarantee that any Avarin language is going to structure itself similarly to an Eldarin one). (...) Ara sīrā rūmanā vamantyančagā.

Parallel to the very scientific and rational genealogical research of  the #TolkienAncestry, there is also a mythological story. I have already written about these extraordinary coincidences, associations, inklings. Of course it's a fantasy. But what a fascinating one! (smile) You remember that Professor Tolkien in The Lord of the Rings "claimed" that his book was nothing more than the English translation of The Red Book of Westmarch (see Prologue and the Appendix F) written in Common Speech (Sôval Phârë). The professor would make such a translation in Oxford.Meanwhile, from the #TolkienAncestry study we find out that Tolkien's name comes from the Prussian Tolk-īn 'a descendant of Tolk', while tolks is  – 'translator, negotiator' (Old Prussian *talki). With the surname (and earlier forename of the noble family von Merklichenrad in Prussia) – with Tolk alias Tolkien – the name of the village Tołkiny is connected. Tołkiny is the Polish rendering of the Prussian-German form from the 15th century – Tolkynen (= 'Tolkiens') It is a place-name of the kinship-type typical for the Baltic languages.

The Tołkiny are situated in the borough of Korsze, Poland in the area of ​​the ancient Prussian land of Bartia. Before 1945 it was East Prussia. In the same borough there is a Garbno settlement - in German Lamgarben (see here). The German name derives from the Prussian name Laumygarbis (1339) and Lamegarben (1419). In the reconstucted Old Prussian laūma 'fairy' and gārbs 'hill' = * Laumigarbis (according to Mažiulis) or 'Hill of Fairies'*! You will read about the Prussian laūma here. Did you know that the Slavic rusałka, the Latin nympha, is Germanic ... elf? It is a mythological spirit of Baltic mythology and folklore (a word attested in Latvian, Lithuanian, and as we also see in Prussian). The word may be derived from the Proto-Indoeuropean word *loudh-ma 'the rising one' (Gatter KZ LXXIII 52-57). Thus the Tołkiny alias 'Tolkiens' is close to the Elf Hill. The people from that land believed that the Prussian Elves lived there! Do you feel this thrill?
So the matter is simple (of course, looking with our mythical eyes): the first Tolkiens, the Prussian-German translators of the fourteenth century knew Laūmas, or the Elves, and from them they received a mysterious book bound in red leather, which was written with strange letters. The book was in the possession of the antiquarian, Christian Tolkien from the 19th-century Gdańsk, but finally it was sent to England, and the descendants of Johann Benjamin Tolkien kept it until the 20th century, when a descendant of the first Tolkiens - a famous Oxford professor - broke the code and read the Elvish letters called the Tengwar... (smile).