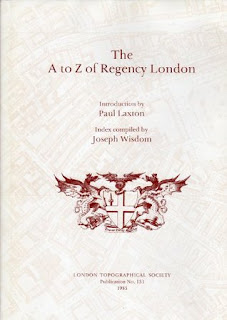 From early documents and address books we know that John Benjamin Tolkien (b. 1752 in Gdańsk/Danzig, d. 1819 in London) lived in an ancient parish Clerkenwell (see map below). His adresses were: White Lion Street (1799) and 145 Saint John Street (1808). We also know that his business "Gravel & Tolkien" (clock- and watchmakers) was at 49 Saint John Street.

Clerkenwell has historically been associated with radicalism, from the Lollards in the 16th century, the Chartists in the 19th century and communists in the early 20th century. John Benjamin Tolkien ("The Older") belonged to the radical Christian movement called Countess of Huntingdon Connection (see here). There was also a Freemasonic temple there (and I suppose that the Tolkiens were not only Christian non-conformists, but also the Freemasons).

Looking at Horwood's map I realized that today's numeration is different from that of the 1800s. And new hope emerged that the house where J. R. R. Tolkien's grandfather was born still existed. I have found these two localizations (see also the lower map with the non-comformist Spa Fields Chapel where the Tolkiens attended the services and St James Anglican church where they had to baptize children and marry their wives):

I wonder which numbers from Horwood's map belonged to which existing house – if one of them (for instance the one on the right signed yellow) was 145 Saint John Street? Maybe you can help me? Maybe you know a book or a website with old and new numeration? It would be great to find the house where three generations of J. R. R. Tolkien's ancestors lived in London. Please, send me your comments and guesses.