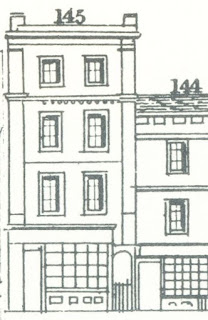 I present three nice drawings of the houses inhabited by the Tolkien family in London in the nineteenth century. Between 1838 and 1840 London publisher John Tallis created a series of 88 pamphlets titled a 'Tallis's London Street Views'. Read about them on the website London Street Views. I hope Baldwin Hamey, the owner of this website will one day descript the first two houses, which belonged to Daniel Gottlieb Tolkien (1746, Danzig/Gdańsk – 1813, London) and John Benjamin Tolkien (1752, Danzig/Gdańsk – 1819, London) and his descentants (George Tolkien and his son, John Benjamin Tolkien, JRRT's grandfather). The third house is well described by Baldwin here.
Autor: galadhorn o 12:34