The Tolkiens' heraldry: tradition and reality

NOTE: About the historical coat-of-arms of the Prussian Tolkien family read here: "Tolkien - a noble family in Prussia" and "Tolkyns' seal from the 15th century found!"


The genealogical trees at the end of the Red Book of Westmarch
are a small book in themselves, and all but Hobbits would
find them exceedingly dull. Hobbits delighted in such things,
if they were accurate: they liked to have books filled
with things that they already knew, set out fair
and square with no contradictions.


«The tradition that the eldest son was always called Johann or John which returned to me because my eldest uncle John Tolkien the sailor had no sons; and he had tradition of the family arms. The latter was said to be or have been – a blue shield with two gold chevrons and 5 gold stars three above and 2 below. The crest a half-griffin. I do not describe them in technical heraldic language as they are uncertain (and German in any case). The crest is given from an impression of my father’s seal; The motto is said to have been ‘Fest und Treu.’»


For the first time in the sources we find a mention of the Tolkien family tradition concerning their coat-of-arms. J. R. R. Tolkien wrote that this tradition was transmited to him by his half-uncle, John Benjamin Tolkien IV.

Who was J. R. R. Tolkien's half-uncle? According to my research  (see: "Four Johns Benjamins: watchmaker, gentleman, music-seller and freemason")

John Benjamin Tolkien IV (January 1845, Birmingham – October 1883, Camberwell) was a pianoforte tuner, a music dealer in Birmingham, a newspaper reporter in London, even a freemason (as a Senior Warden in the Lodge of Perseverence in Halesowen, Worcestershire in the years 1871–1881), and according to J. R. R. Tolkien a sailor (in 1868 his wife gave birth to their daughter "at sea").

He was a half-brother of Arthur Reuel Tolkien, J. R. R. Tolkien's father. His father was John Benjamin Tolkien III (1807–1896) and his mother was Jane Tolkien, neé Holmwood (1806–1854). In his childhood he lived with his parents at Porland Villa, Aston (Birmingham). In the age of 6 he was a "scholar at home". His father, J. R. R. Tolkien's grandfather, was a music seller at 70 New Street, Birmingham.

Our John Benjamin IV moved to Handsworth in 1871. He lived with his London wife Agnes and with a daughter, Beatrice Tolkien ("born at sea" in 1868) at 1 Limegrove near Finch Street (now Road) in Handsworth. He is described as a music seller and tuner, but in the years 1871-1881 we find him also as a freemason (I suppose that his father, John Benjamin Tolkien III, J. R. R. Tolkien's grandfather, was a freemason too; see "Four Freemasons in the Tolkien family").

From 21 March 1871 to 1881 he was a member (Senior Warden) of the Lodge of Perseverance (No. 573) in Halesowen, Worcester. He (or his father John Benjamin Tolkien III) composed a masonic hymn United Ever.

"He had tradition of the family arms..."


J. R. R. Tolkien in his letter described the coat-of-arms of the Tolkien family according to the tradition of his half-uncle. Presented to us for the first time it is as follows:

The latter [the arms] was said to be or have been – a blue shield with two gold chevrons and 5 gold stars three above and 2 below. The crest a half-griffin. I do not describe them in technical heraldic language as they are uncertain (and German in any case). The crest is given from an impression of my father’s seal; The motto is said to have been ‘Fest und Treu.’»

I can try to describe this coat-of-arms in the heraldic language:


Arms – Azure, two chevronels between five mullets or, is borne by the name of Tolkien
Crest – A demi-griffin [or?]
Motto – "Fest und Treu"

And in German blazon:

It seems that J. R. R. Tolkien composed his coat-of-arms of three elements:

There is a drawing by Tolkien of the same coat-of-arms in the Bodleian's archive (it was never published and it is generally not known among the Tolkien scholars). First informed me about its existence a Tolkien scholar and my collegue, Denis Bridoux. Mrs Catherine McIlwaine, a Tolkien archivist at the Bodleian Library has informed me that it is: Oxford, Bodleian Library, MS. Tolkien Drawings 88, fol. 34 which belongs to loose drawings from The Book of Ishness from 1911-1928. This drawing is undated and the verso is blank. The meaning of this drawing was not known until my discovery and the publication of J. R. R. Tolkien's letter from 1951 (see above). The shape of that arms generally matches what the letter says. The only difference is that there are four five-pointed stars above the chevrons and two below. The top of the shield is not flat, but divided in two inward turning curves. Between the griffin and the shield there is a crown like in German heraldry (the so called "older crown of nobility" – see here). Tolkien's drawing resembles the arms reconstruction made by Nimwen from Poland (see the drawing above and below).

In English tradition chevrons with mullets (five-pointed stars) but with different colours were heraldic devices of the families of Columbine, Davy of Devonshire, Davies of South Wales etc. (see A Display of Heraldry by William Newton, London 1846, p. 179, see here). In Germany I couldn't find a Wappen like this in any German Wappenbuch. A coat-of-arms a little bit similar belonged to the family Neumann:

We can see a crown (a golden Prussian crown), a griffin, golden stars on the blue shield and the motto: "Fest und Treu". The nobility of Neumann belonged to the noble class of Kingdom of Prussia. The goods in Sprotischdorf and Wichelsdorf belong now to Poland. They are now called Henryków near Szprotawa and Wiechlice in Lower Silesia (Dolny Śląsk). We know now that the Tolkien family came to London from Polish town of Gdańsk (former Danzig). I have also tried to find a similar arms among the heraldry of that place. In the book Herby patrycjatu gdańskiego (Wappenschilder des Danziger Patriziats) by Mariusz Gizowski there is not a coat-of-arms like this. In Gdańsk we can find only three heraldic devices with a griffin: arms of the Bostacus family, of the Remmersons and the Behms. I didn't find John Benjamin Tolkien's arms in the Gdańsk heraldry.

Tolkien's drawing comes from about 1914. Tolkien's description comes from a 1951 letter. Professor Tolkien claimed that the arms were his half-uncle's tradition. Maybe John Benjamin Tolkien IV, a freemason, devised his emblem by himself? Maybe a source was the Tyrrell's coat-of-arms and the German traditions of the family (together with the motto of Prince Albert: "Fest und Treu"?). If his father-in-law, William Tyrrell as a gentleman belonged to the Tyrrell nobility, he could use these arms: 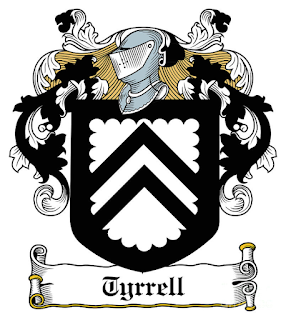 We can see two chevrons like in the arms of John Benjamin Tolkien. Maybe J. R. R. Tolkien's half-uncle added stars (six of five), different colours and a motto known from Prince Albert (Prince Albert of Saxe-Coburg and Gotha), from the prince's coat-of-arms: 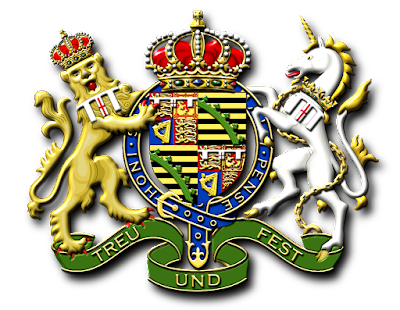 Interesting is also coat-of-arms of Father Francis Xavier Morgan who took over custody of John Ronald and Hilary Tolkien after their mother's death. Father Morgan belonged to the Welsh nobility (see here) and his arms were: 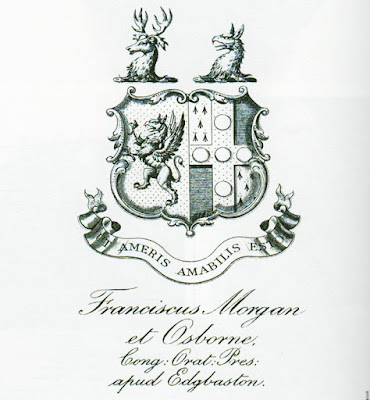 Chevrons from Tyrrells, motto from Prince Albert, and griffin from Father Francis Morgan? It would be too easy. I believe that thanks to this text I will find your support and we will resolve the mystery of this coat of arms.

And in the end... Eleni, tulca, voronwë, estel... Stars and "Fest & Treu". Do you think that the starry emblem of the Tolkien family and the motif of perseverance, sturdiness and faithfulness could have an influence on J. R. R. Tolkien's Legendarium? He drew his arms in the Book of Ishness, in the beginning of his mythopoeia!