First was Tolkien, then Tollkühn


"the spelling Tolkien was adopted only by our family (probably by my great grandfather,) a measure of anglicization – the former German spelling being TOL(l)KIEhN. (As such it is only a form of the German adjective tollkiehn "rash"; but very many German surnames are uncomplimentary.)"

But according to my research the spelling Tolkien is much earlier in this family.  It was not an anglicization. It was an original form derived from Old Prussian (one of the Baltic languages) where Tolk was a family name from German < Old Prussian tolk 'translator, interpreter' and the variant Tolkyn/Tolkin meant 'descendant of Tolk' (< Old Prussian).

J. R. R. Tolkien's great-great-great-great-grandfather from Prussia (not from Saxony!), Christian Tolkien (1677-1746), a baker in Kreuzburg, Kingdom of Prussia (today Kaliningrad Oblast) used the form Tolkien. His ancestors too. The spelling Tolkien is in fact earlier than the germanization (giving a sense in German) as Tollkühn or Tollkiehn.

J. R. R. Tolkien was unfortunately not right concerning his family name. He had no access to the data we have today.

I present the spelling Tolkien from: 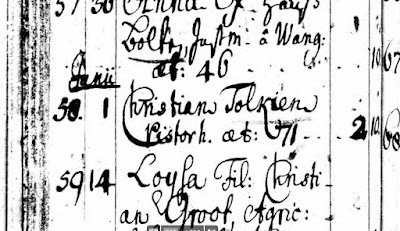 The earliest church record of the Tolkien family in Kreuzburg, Ducal Prussia, comes from 1645 (one even earlier comes from other documents from 1614 – see here about Friedrich Tolkin). We can see the archaic form Tolkin there: 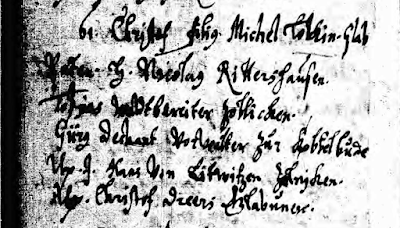 Michel Tolkin was a kölmischer Schulz zu Glabunen (a mayor of a village Globuhnen near Kreuzburg, Ducal Prussia) who lived in the years c. 1625-1701. He was an assured great-great-great-great-great-great-grandfather of J. R. R. Tolkien, a member of the post-nobility, of Prussian foedales.
Autor: galadhorn o 23:36